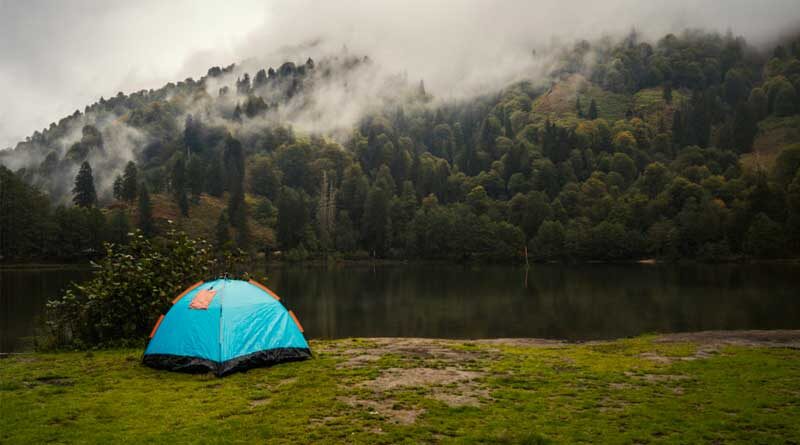 From a scientific point of view, the change of state from a vapor to a liquid is called condensation. Condensation is inevitable when water vapor hits a cold surface. The vapor loses energy and changes state into a liquid. The point at which this happens is known as the dew point. Condensation makes everything wet. Wet stuff weighs more, insulates less, and freezes.

When you’re camping, pretty much everything you do is going to make your closed microenvironment more humid and thus increase the potential for condensation, especially in winter. When you breathe you expel water vapor. Wet snow in your tent melts and evaporates during the day and it freezes again in the evening.

Cooking inside your camping tent will create a great amount of condensation. Where possible, always try to cook outside of your tent.

Damp gear will ooze water vapors as it dries.

As you sleep, your body loses water through insensible evaporation. This will end up in your sleeping bag. Yuck!

How to avoid it?

Tent condensation is something that can be reduced but never really avoided. I’ve seen that the side effects of condensation tend to be negative especially in winter. I frequently get asked; I get condensation in my tent what can I do about it? So what can we do about it? After all, we can’t change the laws of physics.

As far as I know, everyone has to breathe. However, a condensation panel inside your tent may help. Most tent inners are breathable. You can also try to vent your tent. Pitch at 90 degrees to the prevailing wind and adjust your zips to create a flow of air. Of course, you have to balance the reduction of condensation with increased heat loss through air circulation. Wet snow in your tent will melt and evaporate during the day. As it cools in the evening or freezes on your inner tent before melting again the next day. Minimize this by brushing off the snow before you get into your tent.

Storing wet stuff like socks or gloves in dried bags can let you keep things in your sleeping bag to stop them from freezing during the night. When you sleep, your body will naturally perspire and all that sweat will end up in the insulation of your sleeping bag. If it is cold as soon as you get out of the bag, that perspiration will start to freeze affecting your sleeping bag’s effectiveness. By regularly airing a sleeping bag you can minimize this buildup of moisture. All outdoor sleeping bags have a black inner to absorb as much of the sun’s heat as possible.

Opening a window or door flap just a little will allow that moisture to filter out. If the weather allows, open us as many windows and doors as you can and if your tent has lower vents, makes sure no gear is blocking the airflow. You can also ventilate your tent leaving the vestibule open so moist air can escape.

2. Dry your wet gear and clothes outside

If you’ve been out in the mountain all day and it’s been raining heavily, you probably got a lot of wet gear. Try to avoid storing and drying it in the tent. Obviously, as the gear starts to dry out, it will release a lot of moisture into the tent and that’s going to create a lot of condensation. If you can, pop it into a dry sack, separate it, and pop it outside the tent, that will greatly reduce the condensation problem. Exped bags are excellent for that and you can get a variety of sizes. They take up no room in your pack and you can just use one to store things outside of the tent.

If you have any gear that gets wet it’s important to store it in a sack or dry bag to make sure the moisture isn’t getting out. That moisture will slowly seep out as the gear attempts to dry and then you end up with the moisture throughout the tent. That means in everything else that was previously dry as the wet gear attempts to get rid of all that excess moisture into anything that it possibly can.

3. Dry your tent and sleeping bag

If your tent is soaking wet, just try to dry it as much as you can in the morning before you move on. Avoid pitching an already wet tent. There’s moisture and that has to go somewhere as it dries off. Just because you don’t think that there’s any moisture in your sleeping bag, doesn’t mean that you should ignore it. Air out the tent and make sure that you bring your sleeping bag outside to dry in the sun as well. This will make sure that any moisture that was still there is finally removed and you can feel more comfortable when you lay down in the bag at night (because that’s when you’re going to feel the moisture).

If you cook in your tent (which is a bad idea anyway for safety reasons) it’s going to introduce more moisture and then you’re going to have condensation. This will also get onto your sleeping bag and between the sleeping bag and sleeping pad. By keeping your cooking outside you’re going to have one less thing that can produce moisture and create a damp space within the tent. Also, boiling water inside creates a large number of vapors. If you’ve got to cook in the tent because it’s raining heavily or you just want to cook in the tent, try to keep the stove towards the front of the door so any excess heat can escape out of the door.

When you’re thinking about pitching your tent, there are some certain little tips and tricks that help you to avoid that buildup of condensation. Try to pitch away from rivers, streams, lakes, and ponds because that’s going to increase the humidity in that area. Try avoiding hollows where air can sink and cause that condensation problem. But if you do have to pitch by water, there are going to be mosquitoes and bugs so I’d always recommend taking some mosquito repellent with you on your trip just to make sure that you’re not getting eaten alive.

6. Use a protective layer

7. Keep your face out of the sleeping bag

There are some liners that will help protect your sleeping bag from any moisture that you might put off throughout the night. These go on the inside of the bag and you lay inside of it. You might wake up damp in the morning because of that moisture but it’s not going to get into your sleeping bag or into the sleeping pad, so it depends on what your overall goal actually is as to whether that’s going to work for you.

8. Keep the snow out

Snow is another source of a whole lot of moisture and if you bring any snow into your tent, even on your shoes, you’re going to notice. It’s going to melt into everything and then it’s going to spread. Before you know it, your entire tent could be slightly damp from just a small amount of snow. Make sure you’re taking shoes and boots off outside the tent without letting them drip onto the interior of your tent where they can start causing you problems.

When you get too overheated you’re going to find yourself sweating, which is going to be a problem for your comfort level and it’s going to introduce even more moisture into your sleep system. Sweat is definitely an uncomfortable kind of moisture and the more you sweat the more it’s going to be absorbed into the sleeping bag and the pad underneath it. This will also get released into the rest of the tent, causing more condensation.

Don’t forget that rain fly and ground fly to keep moisture out. It’s easy to forget when you’re caught up in all the other things that need to be done or that you’re planning on getting done, but skipping this step is something you’ll definitely regret. You’ll find yourself with a wet tent in the morning just from the morning dew or even a light sprinkle that happened during the night. Even a small amount of water can make you extremely uncomfortable if you’re not very careful.

When it comes to camping, moisture is definitely not going to be your friend. You want to make sure that you’re keeping it out of your tent in as many ways as possible. It starts with putting a tarp over your tent and under your tent to keep it from seeping in. What about condensation that happens inside your tent? That’s another factor you need to keep in mind before you head out.

When you have the tips above down you’re going to feel a whole lot more comfortable going camping in a tent. You will know just what to do to make sure that you don’t get too damp or uncomfortable and you’re going to keep your tent, your sleeping bag, and your sleeping pad protected as well. And all it takes is a few extra minutes to do things the right way.

Hopefully, these tips will reduce condensation in your tent and help you stay warm and dry. 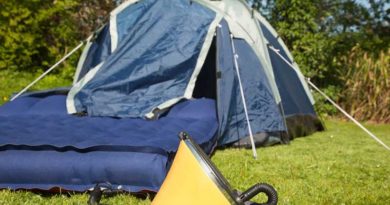 How to Fit an Air Mattress inside a Tent? 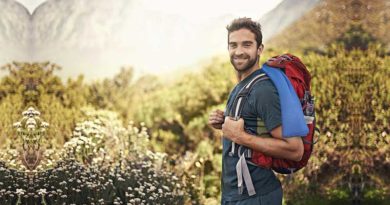 How to Fit a Big Sleeping Bag into a Backpack? 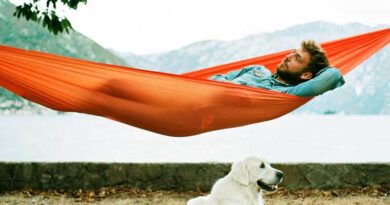 How to Sleep Comfortably in a Hammock?

October 26, 2020January 14, 2021 Pure Hiker
We use cookies to ensure you get the best browsing experience. Learn more